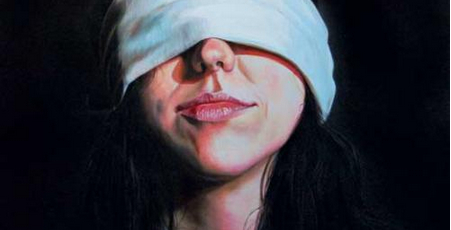 Good stories, lightning bugs, Pixar films — these are just a few of the things that inspire Georgia-based artist Craig Hawkins. Oh, and the life, death and resurrection of Jesus Christ. Looking more like a scruffy hipster than an evangelical Christian, Hawkins is a deeply spiritual artist, often drawing inspiration from biblical texts and meditation on God. Yet his work is not your typical religious art: With nary a crucifix in sight, Hawkins creates vibrant works of realism, asking broad questions about humanity through engaging composition, dexterous use of color and an astonishing attention to visual detail.
On view now at the 930 Art Center, “Infinite Space” includes much of Hawkins’ work from the past three years, including portions of three series and the beginnings of a fourth. This is the first retrospective show for Hawkins, and he says he’s excited “to see all (these works) in one space together, not only how they interact but also how alike they are in many ways.”
Themes of “veiling and hiddenness” appear repeatedly in Hawkins’ work. His first series, “Notice,” includes 16 charcoal portraits of people’s backs, eight of which are on display in “Infinite Space.” From a guy in rumpled flannel to a girl with long black hair and a polka-dot skirt, these are incredibly detailed portraits, revealing much in the curve of a shoulder or the disheveled hair covering the back of a skull. The works are clearly personal; Hawkins uses his friends, wife, mother and occasionally himself as the models for all his work. Yet while each of the drawings is highly individualized, their charcoal streaks and white space unify them in a display Hawkins dubs “waiting on nothingness.”
Hawkins says the series started with the concept of “pieces that will make me feel ignored when I approach them.” In the end, however, the project took a very different direction. “After I created the first four, some friends and I started critiquing them, and it was the opposite of being ignored. It felt like we were all looking on with them, whether they’re all waiting for the bus or it’s a glorious presence that we’re all looking toward. You can interpret it either way. I was aiming for a negative outlook, to see if I could do it, and it wound up being more positive than I could have imagined.”
After the “Notice” series, Hawkins wanted to experiment with color while still exploring the same concepts of isolation and hiding. “The Box” series does just that, taking the idea of human beings as boxes, closed off to the world in a private space, and riffing on it in a series of 13 vibrant, thought-provoking paintings.
Like “Notice,” “Boxes” draws attention to the small, often overlooked details of a person’s appearance and the judgments we make based on these clues. With only feet or sometimes legs exposed outside the boxes, the portraits in Hawkins’ second series still manage to convey personalities and relationships: the sweet, dancing flip-flops and sneakers of a married couple (Hawkins and his wife, in “Box No. 11”), or the beaten-up Converses and skinny jeans of a rebellious twenty-something (the vibrantly blue and yellow “Box No. 12,” Hawkins’ favorite piece).
While his website ties the “Box” paintings to Bible verses and scriptural concepts, Hawkins said at Friday’s opening that the series can be interpreted a number of ways, from the religious to the psychological. “The box could be a lie, it could be questioning what and why we hide from things, what we hold private versus public … (It’s playful, but it) can also be a very mental type of space, for thought. I believe art asks questions better than giving answers. (Hopefully) it’s broad enough to be applicable but personal to you and to me.”
The exhibit is rounded out by the whimsical “Lightning Bugs” series, as well as “Blind M.” and “Blind C.,” the first two pieces in a new series exploring the idea of “walking by faith, not by sight.” This seems to be the most blatantly religious project so far for Hawkins, yet he still emphasizes the multi-faceted nature of his work and the space it offers for any number of interpretations, religious or otherwise.
Like the artist himself, Hawkins’ work defies expectations and seeks to redefine what we think of as religious art: whimsical, intriguing, modern and out of the box (no pun intended).
‘Craig Hawkins: Infinite Space’ Though Feb. 12The 930 Art Center930 Mary St.the930.org
http://leoweekly.com/ae/art-hawkins-examines-religion-outside-box