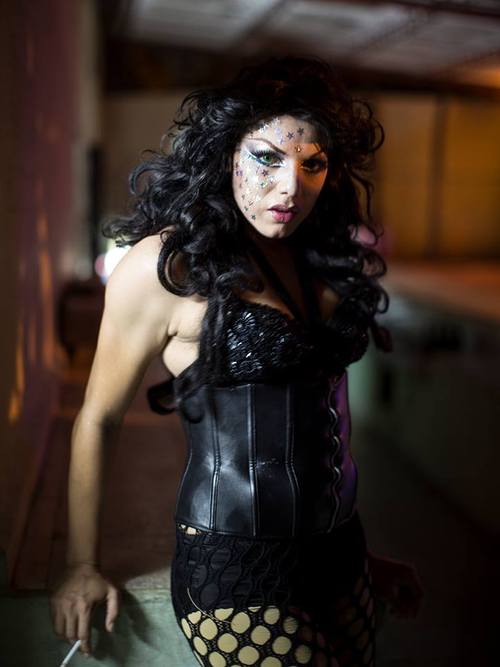 Ross Gordon was ready for trouble. Re-entering the United States after a supposed stint in Nassau, which had in fact included an extended stay in still-embargoed Cuba, “I was expecting a light shone in my eyes, tons of questions. I was all ready to be harassed and write a big story about it for the paper,” he recalls. But when Gordon explained to the border guards exactly what he had been doing with his time in Cuba, they let him right through.

Gordon is a photographer, dedicating his life to traveling the world and documenting indigenous or little known peoples across the globe. “All of my photography revolves around and is based on cultures that are changing or vanishing,” he says. In Cuba, the changing culture before his lens was the rapidly evolving gay and drag scene, a term that would have been unthinkable even five years ago.

“They’ve been under Communist rule for 50 years. Homosexuals had a maximum jail sentence of 20 years just for being gay,” Gordon explains. “So even five years ago, they weren’t walking around expressing themselves and in the open. But now, with the laws relaxing, you’re starting to see openly gay men and women out on the streets.”

Cuba certainly seems to be making far greater strides than their Cold War buddies in The Country Formerly Known As the USSR. From legalizing gender reassignment surgery in 2008 to hosting a weeklong International Day Against Homophobia celebration earlier this year, the country is slowly inching its way toward tolerance and equality, with the charge largely being led by President Raul Castro’s own daughter Mariela, who serves as director for the country’s National Center for Sex Education.

As a photographer, Gordon was able to qualify for travel to Cuba under what’s called a general license, which allows professionals to cross the border if their research has the potential to be disseminated back in the United States. With his show at the Green Building Gallery, Gordon fulfills that promise, bringing the drag queens and transsexuals of Havana to the streets of Louisville.

It wasn’t a project Gordon set out to shoot; like with most of his fine art photography, he stumbled upon it serendipitously. A friend’s mother wanted to take him to a club and he agreed, not realizing the spot she had in mind was a gay bar hosting a drag show. Gordon speaks only broken Spanish and had no translator, yet he used his Southern manners to gain the transformistas’ (the Spanish term for drag queen) trust, capturing intimate portraits of a culture that is just starting to emerge from the shadows.

“It’s all about trust,” he says. “A smile goes a long way for people. It’s just about being genuine, kind, friendly and interested in other people. When people believe you and trust what you’re doing, they loosen up.”

Meeting and interacting with a diverse range of people is in large part what drew Gordon to photography in the first place. Moving out to the Northwest and teaching himself with his uncle’s old dark room equipment, Gordon says, “I just loved it. Walking around the streets of Seattle, meeting people and taking pictures. And the first time I saw an image come through on the paper, through the chemicals, it was like magic. And I just knew that was what I was here to do.”

“Photography allows me to interact with people and travel,” he continues. “Cameras can get you places that other people can’t get into, a lot of the time (Case in point: an embargoed nation blocked to U.S. travelers). If you’ve got two or three big cameras dangling around your neck, people seem to think you’re of some kind of importance.”

For those not lucky enough to go traipsing around the globe with a DSLR dangling around their necks, Gordon hopes his work will open people’s eyes to the incredible diversity of our world, a diversity he claims is being driven to extinction by corporate greed and capitalization. But while his world-turning-into-one-big-white-blob rant may smell of pessimism, Gordon insists his work is more about the good in humanity than the way we’re slowly destroying each other.

“Hopefully the audience at this show can learn a little bit about how important it is for people to be free and to express themselves, and for us to support each other and accept each other,” he says. “They say variety is the spice of life, but sometimes you have to go out of your way to find it.”