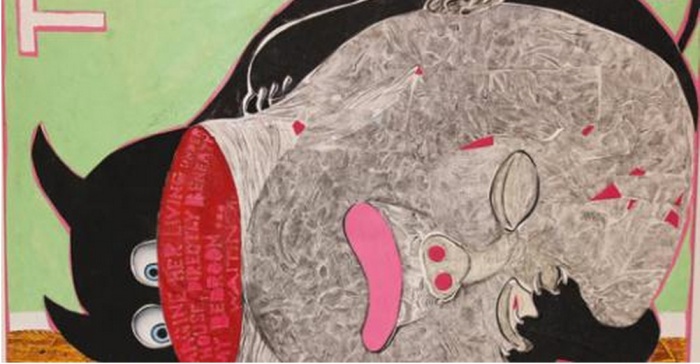 For many Louisvillians, mention of the Speed Art Museum calls up memories of school field trips and afternoons with Grandma, taking in the Monets. But with a much-discussed $50 million expansion, a satellite space in oh-so-trendy NuLu and a guest curator who names exhibits after indie pop/punk rockers Beat Happening’s lyrics, something is clearly up with this evolving cultural landmark.

Reinvention seems to be the word of the day — both with the museum as a whole, closed for renovations until 2015, and with the latest exhibit at their Local Speed site. “We’ll Wear a Jolly Crown” brings together the work of five diverse artists to explore “reused and repurposed images, objects, ideas and materials” and “the idea of existence, what it means to be, and death.” Guest curator Aaron Skolnick says the show evolved out of a personal project of his, a painting series that dealt with JFK’s assassination.

“My own work often deals with death,” explains the painter, who became interested in curating a couple years ago as a way to give emerging artists a chance to show their work. “Our mortality is that monster under the bed that will never leave. I was really interested in seeing how other artists dealt with the idea of existence and death. With a subject like this, it couldn’t just be one take on it. I wanted to open up a dialogue.”

The artists included in the show — Louis Zoellar Bickett, Stephen Irwin, John Knuth, Trenton Doyle Hancock and Aurora Childs Parrish — are a diverse bunch. Many should be familiar to Louisville viewers: Photographer and conceptual artist Bickett is a Lexington native, the late Irwin was a key figure in the Louisville contemporary art scene, and Hancock, of Oklahoma and Paris (Texas, not Kentucky) was recently featured at 21c as part of the museum’s new partnership with PBS’s “Art21.”

As the temporary offspring of the under-construction museum, the Local Speed presents a unique opportunity for a curator, a sort of hybrid gallery-museum space that Skolnick finds exciting. “The fact that it is a hybrid space at this moment gives it freedom that a museum doesn’t have,” he reflects. “But we still know it is a child of the Speed.”

This freedom and spirit of experimentation is reflected in the pieces Skolnick selected for the exhibit. There’s the aforementioned Bickett, who catalogues items from his daily life for what he calls “The Archive.” The exhibit opens with his framed Lexington Herald-Leader obituary of Dutch-American artist Willem de Koonig and is book-ended by his sculpture “Family Grave Dirt,” part of the Speed’s permanent collection.

Irwin, who passed away in 2010, experimented with repurposed vintage pornography, selectively erasing portions of salacious images from the ’60s and ’70s to give them a new artistic identity. Hancock contributes three self-portraits, rich in his usual mythic imagination. Rounding out the exhibit are Knuth, who uses specially bred flies, fed sugar water and pigment and enclosed with a blank canvas, to create an organically recycled work (fly vomit never looked so good), and Parrish, whose ceramic sculptures, “Weird Creatures on an Island,” examine identity in the context of myth.

Skolnick took advantage of the Local Speed’s unique position in the arts landscape to create something a little darker than your typical show, explaining, “I think this is one of the more serious shows that’s been done here in a while. Part of the problem with creating an art scene is that you can end up with lots of ‘nice’ shows that are easy for people to see. I was never interested in making something likeable. I love those moments in life when you’re weirded out or terrified, because I think something great comes from that. I wanted to create something that would challenge people.”

While relatively small, “We’ll Wear a Jolly Crown” packs a massive artistic punch, boding well for the changing museum. “They have a freedom they didn’t have before,” explains Skolnick. “Personally, I believe it has a chance to become a great competitor in the arts scene in Louisville. Places like 21c are great; they have a chance to introduce a larger audience to art, and they make it hip and cool to like art. Now the Speed has a chance to come back and to not just be a museum where we see our past. They have proven that they, too, are a force in the community that is going to take chances on young artists and curators, like myself.”