This article is the first in a series titled “GRITS: Girls Raised in the South,” in which we profile some of our favorite Dixie ladies and the things that make them awesome. Got an idea for a fabulous femme we should feature? Shoot us an email at zeldaandscout@gmail.com! (Alliteration optional.)

Reasons she’s awesome: Aside from being one of the namesakes for this here blog, Zelda Fitzgerald was a vivacious, opinionated, passionate livewire of a woman, dubbed “the first American Flapper” by her husband. Though today she is chiefly remembered for her tempestuous marriage to the author of such Jazz Age masterpieces as “Tender is the Night,” “The Beautiful and Damned,” and “The Great Gatsby,” as well as for her friendships with a veritable Who’s Who of 1920s pop culture including Ernest Hemingway and Tallulah Bankhead, Zelda was an inspirational woman in her own right.

An accomplished dancer, Zelda practiced up to eight hours a day in hopes of becoming a world-class ballerina. In addition to co-writing plays with her husband, she was a prolific author, penning poetry, short stories, essays, and even a novel. She was a painter, exhibiting a collection of self-portraits in New York in 1934. A proto-feminist, as early as high school she refused to comply with the stringent expectations for Southern belles at the turn of the century: drinking, smoking, dancing the Charleston, swimming in a tight flesh-colored bathing suit that made her appear nude, and socializing, unchaperoned, with members of the opposite sex.

Zelda’s life was not always a happy one. Her marriage to Scott was plagued by jealousy, infidelity, and wild bouts of rage. She struggled throughout her life with alcoholism and mental illness. She was diagnosed with schizophrenia in the 1930s and spent the remainder of her life in and out of mental hospitals, until she died at the age of 47 when the facility where she was being held caught fire. Zelda was locked in a room, awaiting electroshock treatments, and was thus unable to escape: a fiery end for a firebrand of a woman.

So why do we love Zelda? To us, she epitomizes many of the best qualities of a Southern dame: vivacious, opinionated, glamorous, independent, full of sass, and unafraid to forge her own path and speak her mind. She was a force to be reckoned with, the life of every party and a trailblazer for the flapper movement. And while she may not have succeeded in all of her lofty artistic ambitions, you could never say she didn’t try, and with gusto. 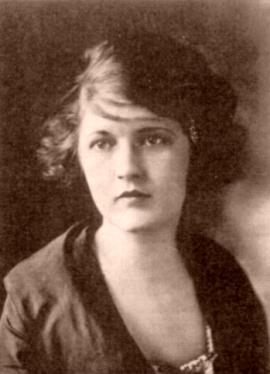 Favorite quips and quotations: “She refused to be bored chiefly because she wasn’t boring.” (Eulogy on the Flapper)

“‘The trouble with emergencies is,’ she said, ‘that I always put on my finest underwear and then nothing happens.’” (Save Me the Waltz)

“Excuse me for being so intellectual. I know you would prefer something nice and feminine and affectionate.” (letter to F. Scott Fitzgerald)